Today I have a Bernard Foong over! He's going to give us a snippet from his first book, A Harem Boy's Saga. 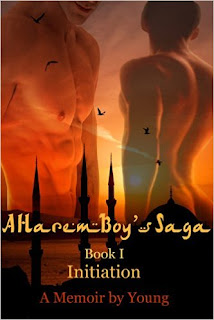 In this snippet, we get some backstory on the main character.

I shot up like Jack and The Bean Stalk while I was at the Mehodist Boy’s School; I was mostly stalk. Both my parents were tall by Malayan standards. I was already five foot ten and still growing.

My voice was changing and so was everything else. I was becoming a young man. I hated the Methodist Boys' School I attended because I was constantly teased and harassed for behaving like a sissy boy. Being bullied relentlessly by the older boys was a misery, my own “Nightmare on Elms Street.” I prayed for the day when I would be ready to leave for England.

I loved my mother, aunties and cousins, but I longed to see the wider world. Each day, I looked skyward like a frog waiting to jump out of the small pond (Kuala Lumpur) to catch a panoramic view of the large ocean (London, England.) I knew it would happen soon. Foong Senior was a great believer in sending his sons abroad for further education and I was next in line.

To me, my days at Methodist Boys' School were a phase that I had to endure for a short period. Thank God classes were only half-day affairs. Every morning before classes began, a half hour student assembly was held in front of the school's main building out in the football field. All students stood at attention while Malaya's national anthem played over loud speakers. The Head Master would stand at the podium providing the usual boring school agendas and current affairs. The boys would be fidgeting, or up to their mischievous behaviors.

Harem Boy I Blurb
This provocative story is about a young man who was initiated into a clandestine sexual society. He was spirited to the Middle East, from his UK boarding school. He attended the Bahriji School (Oasis,) in The United Arab Emirates in preparation for serving in Harems for the wealthy and elite.

It is also a love story between the young man and his ‘Valet’ who served as his chaperone and mentor during the boy’s Harem service.

Author’s note:
I had a privileged and unique upbringing in Malaysia, where I was known as a "sissy boy." Following in my brothers' footsteps, I was sent to an exclusive boarding school in England. It is there that I was inducted into a clandestine organization, E.R.O.S. The Enlightened Royal Oracle Society. For four years, unbeknownst to my family, I was willingly and happily part of a Harem.

My story has been kept under wraps for close to 45 years. The correct moment has arrived for me to make known my unique education.

I hope that everyone has a great day!